Tried to Provoke Crowds While Marching Through African American Neighborhoods

Confirmed leftist provocateur and Occupy Wall Street organizer Jason Kessler encouraged his deluded followers to use both Nazi and ISIS flags during the doomed Charlottesville rally, in which one woman was murdered and thirty others hospitalized in a terrorist car attack by one of Kessler’s followers, James Fields Jr..

While both Kessler and Richard Spencer are now telling the mainstream media and their own sycophantic followers on Twitter that they were concerned about optics, and that Nazi flags were discouraged, the chat logs from the meetings on Jason Kessler’s server tell a far different story.

In a screen shot from Kessler’s Discord server, member “Aaron-VA” told people that were coming to the rally:

“I’m showing up with a swastika shirt and I’m not being turned away.”

Jason Kessler (“MadDimension”) was moderating the meeting as “Event Coordinator”, as can be seen in the upper right corner of the screen.

On multiple occasions they discussed using Swastikas, and how they were not prohibited by event organizers Jason Kessler and Richard Spencer.

In this screen shot, “Americana-MD” encourages the use of swastikas, with Jason Kessler moderating:

“I’m not against swastikas”

“I’ll stand side by side with anyone who flies a Swazi any day.”

“Fuck the normies” he said.

In this screen shot, “Quartermaster’s Ghost” encourages the use of a Nazi flag:

“If you’re worried about how the opposition views you you have the same slave morality as the conservatives so fuck it.” 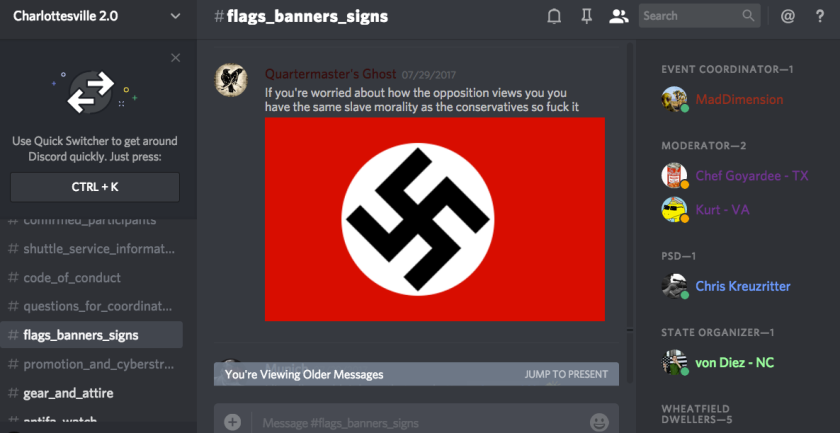 In this shot, “Frederick De Peyrens-VA” shows off what he thinks should be the official uniform for Kessler’s “Unite the Right”:

“Official unite the right uniform has been confirmed folks” he said. 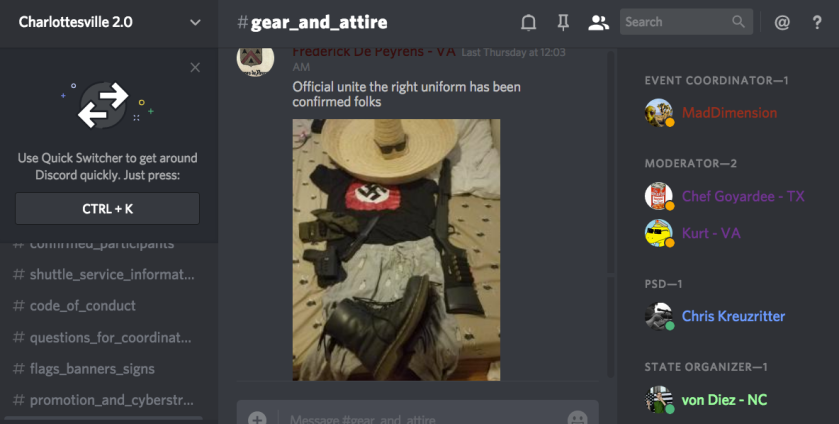 Jason Kessler watches while they plan to bring ISIS flags to provoke a bloodbath. Tyrone thinks “a few of us” should carry ISIS flags:

In this screen shot, the pro-Jihadi “Narrative-Collapse” explains the subtleties of carrying the ISIS flag:

After the terrorist attack that Jason Kessler and Richard Spencer incited, they all laughed about it, as shown in this screen shot from the chat room, taken shorty after the attack:

It is now clear to everyone that Jason Kessler and Richard Spencer encouraged their followers to use Nazi and ISIS flags and imagery, to carry firearms, and to chant for Sharia law and the elimination of Jews, while marching through a mostly African American neighborhood of Charlottesville.

They invited Christopher Cantwell, a fully armed, meth-addicted convict and Black Lives Matter activist to speak and incite the crowd, but he ran away and hid from the police, after getting into an armed confrontation the night before the rally.

Cantwell often incited violence against police and Jews on his “Radical Agenda” podcast.

More on Christopher Cantwell and the leaders of the Alt-Right here.

It appears that Jason Kessler and Richard Spencer were hoping for something much bigger to happen. It is ironic that both of them are now whining about how the police, whom they hate, did not defend them enough during their precious rally.

In 2014, Christopher Cantwell celebrated the cowardly murder of police officers Wenjian Liu and Rafael Ramos in New York City, by Black Lives Matter supporter and member of the Black Guerrila Family, Ismaaiyl Abdullah Brinsley.Kessler and Spencer are now laughing about the attack, mocking the victim Heather Heyer, and saying that they will continue to incite violence, regardless of the “optics”.

While Jason Kessler and Richard Spencer are desperately trying to explain to their supporters that it was not all a “set-up” or trap, their explanations are ringing hollow, in light of all of the evidence that has come out since the attack.

It is hard to believe that anyone would still support the “Alt-Right” after all of the revelations that have come out about its so-called “leaders” since the attack. Richard Spencer’s hero Lenin used to call them “useful idiots”. Let’s hope that they begin to wise up about who their Judas goat leaders really are.

For more background on how Jason Kessler watched while car attacks were planned on his server, click here.

SPECIAL THANKS to Unicorn Riot, for publishing the leaked screenshots from Kessler’s server. There is much more documentation here:

LEAKED: The Planned Meetings that Led Up to Neo-Nazi Terrorism in Charlottesville: